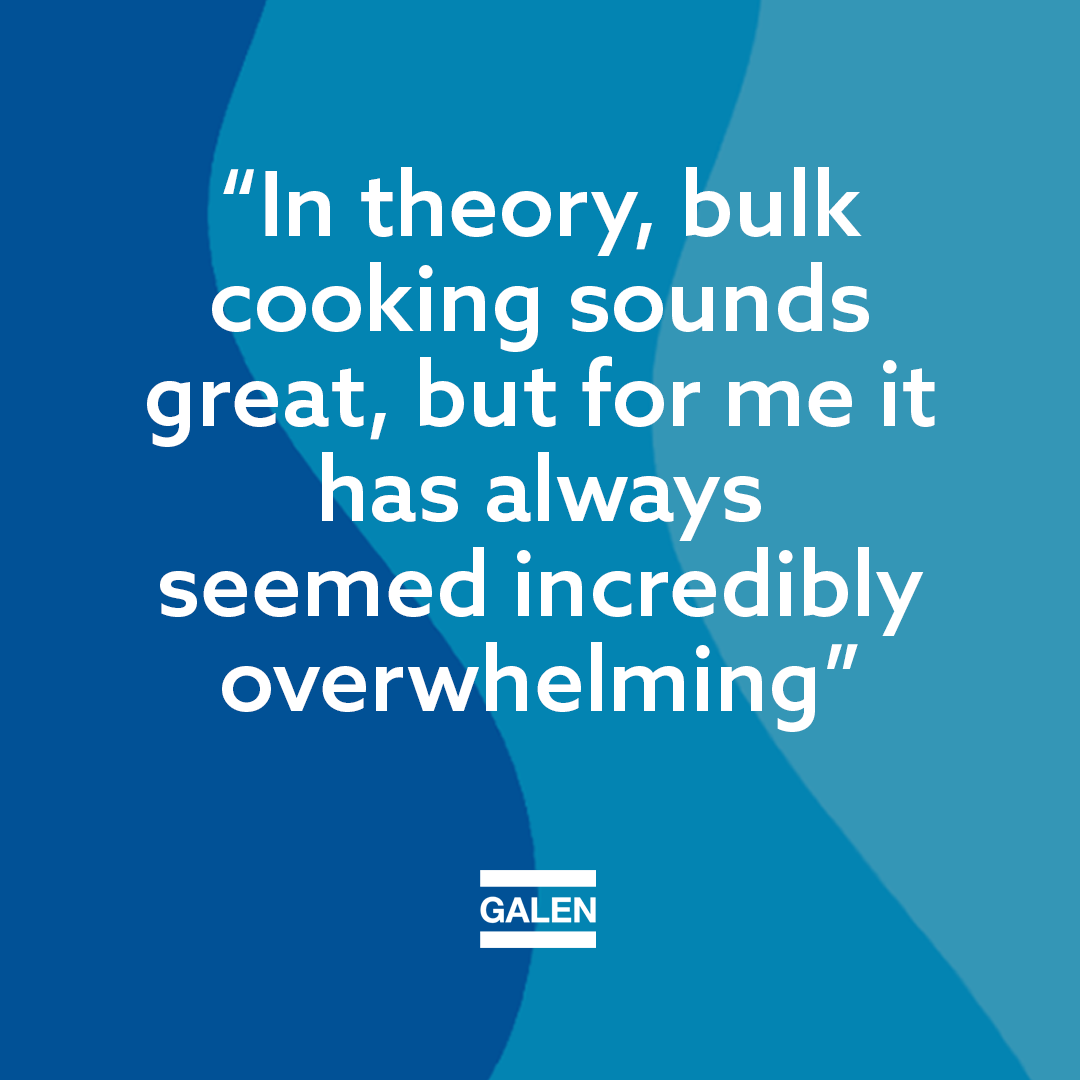 Hello everyone, my name is Clair Willcocks, I am 28 years old and I am Galen Medical Nutrition’s PKU blogger. I am an adult with PKU and I was diagnosed with Classical PKU 8 days after birth. I am on 5 exchanges of protein a day and currently taking the PKU EASY Microtabs substitute 6 times a day.

Bulking cooking is often brought up by dieticians and other members of the PKU community as a great way to help manage our diet. The idea being that it makes multiple, microwavable low protein meals which saves the need for us to cook every meal from scratch. In theory, bulk cooking sounds great, but for me it has always seemed incredibly overwhelming. The thought of cooking all that food at once, whether there will be enough room in the freezer to store it and what if I cook too much? What if it goes to waste because I get bored of eating the same thing every day? What if I don’t make enough food so hours of cooking results in only 2 days of meals?

Before the most bulk cooking I ever did was when I would make far too much pasta for dinner (why is it so difficult to get a single portion of pasta right?!), so I would stick any leftovers in a Tupperware box in the fridge, hoping there would be enough for my lunch the next day. However, I didn’t really consider that to be bulk cooking, as I knew of people that would cook large PKU cottage pies, big pots of rice and curry or a slab of lasagne, filling their freezer completely full of meals. So, the question was how do I get myself to the next level of bulk cooking and what do I need to do that?

In a spur of the moment trip to B&M, I finally purchased some freezer pots, labels and decided, as I had seen on social media, I would cook a PKU lasagne, as I knew it was a meal that could make quite a few portions. So, I followed my normal recipe, I made a big pot of tomato and vegetable sauce and put it with the sheets to then put in the oven. When I filled my lasagne oven tray (an old bread tray which I never use) I realised that I had made far too much veg and tomato filling. I decided then that I would also cook a batch of spaghetti while the lasagne was in the oven because why not!

While that was all cooking, I went to clear out a drawer in my freezer and after throwing away month old packets of chips and hash browns, I was able to get one clear. When the food was all cooked; I laid out my pots, somewhat messily forked lasagne, and spaghetti into them, let them cool down and then stuck them in the freezer. Putting them in the freezer, I was nervous considering when do I use these frozen meals? Are they something I should save for only ‘rainy’ days when I’m running late, or I feel poorly? Or do I use them every day?

After successfully cooking and freezing my first bulk load of food, I woke up the next day and realised I actually fancied a meal of avocado toast for lunch! However, I did soon discover when the bulk cooked meals would come into play! It was when I woke up on a workday morning a few days later and I couldn’t even begin to think of what I wanted for lunch, never mind have the energy to cook something from scratch. Normally, I would get so overwhelmed with the thought of what to have for lunch, that I would only ever face eating a packet of crisps and a cup soup. It was on those days when the bulk cooked meals would come in handy, not just the obvious times when you slept past your alarm.

That was my first experiment in bulk cooking and even though I had both lasagna and spaghetti; I was surprised how much I preferred the spaghetti – the main reason being simply because it was easier to stir the spaghetti halfway through cooking, ensuring it had cooked all the way through. Whereas the sheets of lasagne prevented me doing that meaning even after 5 minutes in the microwave, it was still cold in the middle.

This was exactly what I needed to help me realise that for bulk cooking, I didn’t have to make big fancy meals, but just bigger versions of what I already knew. 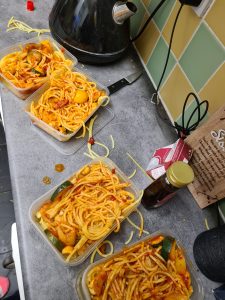