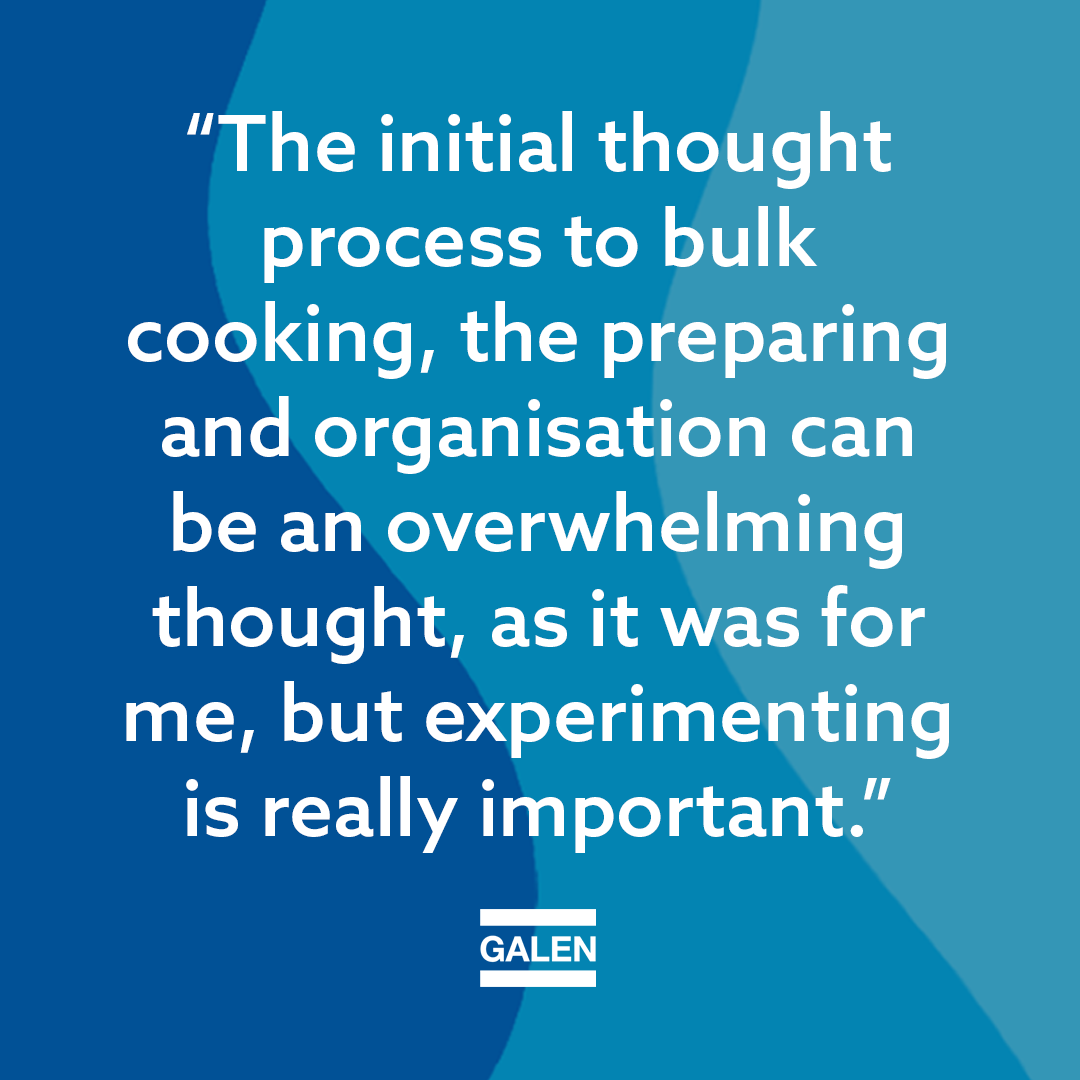 Hello everyone, my name is Clair Willcocks, I am 28 years old and I am Galen Medical Nutrition’s PKU blogger. I am an adult with PKU and I was diagnosed with Classical PKU 8 days after birth. I am on 5 exchanges of protein a day and currently taking the PKU EASY Microtabs substitute 6 times a day.

Armed with the knowledge I could do bulk cooking MY way, I prepared to make my next portions of spaghetti. For Bolognese sauce rather than just half a courgette, which is what I usually used for one portion, I used a whole one. I also used two onions rather than one, a whole pepper rather than half, and so on until I had enough vegetables to make at least 4 portions of the meal, which I had made in smaller variations many times already. 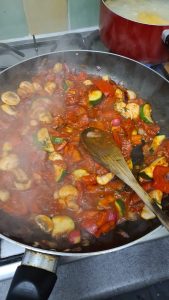 The biggest thing that also helped with portion control was measuring the amount of low protein pasta and rice I was using. Rather than just chucking it in by eye as I normally would; I knew I would need 320g of rice to make four portions, as one portion of rice was 80g – which for some reason, never feels like enough for just one meal! As you’re making things in bulk, you don’t have the worry of making too much because when it comes to bulk cooking, it turns out you can never make too much, it means you make more meals!

Now that I had the basics of what to cook down, I had to figure out when it was best to cook. It seemed to be that I could find the motivation to bulk cook at least once a week. The initial thought of bulk cooking still overwhelmed me, but I found the trick to get myself going, was if I had a Sunday afternoon film on.

At the beginning of the film, I would force myself to put a big pan of water on the hob to boil, even if I had no idea at the time what I wanted to cook. It would mean that once the water was boiling and ready to have something chucked in it, I had found been inspired as to what I wanted to cook, so if I fancied a curry I would put rice in and once that was chosen, the rest of the process of cooking curry filling soon follows. Pausing the film at regular intervals to stir the pots, prepare, chop and fry vegetables and then serve when done (another tip – buy a BIG serving spoon!) it meant by the time the film was finished, I would have 4 or 5 meals ready to go in the freezer! 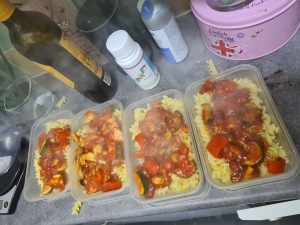 If I suddenly had the random urge to cook another load the following week, I wouldn’t stop myself from cooking, even if I already had food in the freezer, I just go with it. The bonus of this was that it would then give me variety, as I always make sure that I change what I cook week to week. So, if I had made curry last week, I would make spaghetti this one, and so on. At the rate I was eating and cooking meals, I never seemed to have more than 5 frozen meals at any one time. I wasn’t ever sure when I would next be motivated to cook, so I always make sure to strike when the iron is hot!

Before this, I honestly thought bulk cooking would only be for work lunches and when I was in a rush, but they have also been so useful for all sorts of other situations as well. Such as, a quick dinner before going on a night out, a hot meal for when you’re feeling poorly or just on the weekend when you really can’t be bothered to cook and you’re desperately trying to stop yourself from ordering take away! I’ve done lots of experiments since my initial tries, like adding grated vegan cheese before freezing (it beautifully melts all over the pasta when you then reheat it in the microwave!) and making batches soup to freeze in the winter. 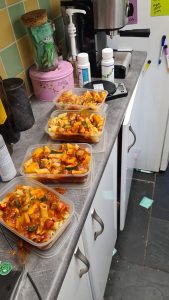 The initial thought process to bulk cooking, the preparing and organisation can be an overwhelming thought, as it was for me, but experimenting is really important. Finding what works for you and your routine is the best way to get started, rather than trying to compare yourself to others or copy what they are doing. Then when you do get going, it’s so worth it. As having a backup on those days whenever the diet, or even the thought of cooking from scratch gets too much, has been so helpful. Even if I don’t use them every day, just knowing that in the freezer there are instant, protein free ready to go meals really releases the pressure of an already high-pressure diet and makes the process of bulk cooking totally worth it.